Traveling to Las Vegas? Whether on a business or leisure trip, there's lots to see and do, like checking out the nightlife, taking in the shows, maybe gambling a bit, and eatiing well. Then what?

Commercial airliners have limited lifespans. Ultimately, they are retired from service, stored in "airplane boneyards" or graveyards, and finally dismantled and scrapped.

Many of these boneyards are located in the States of Arizona and California, adjacent to Nevada, and make great side trips from Las Vegas.

So if you are looking for boneyards close to Las Vegas, this page will help you outline your itinerary.

We love to travel to Las Vegas in Nevada, and have on many occasions. Like others, after a couple days on The Strip, we look for other diversions, like Hoover Dam, the Grand Canyon, Historic U.S. Route 66, Death Valley or enjoying the beauty of the open desert.

Many aviation fans have another destination in mind: airplane boneyards!

Within driving distance of Las Vegas are several airplane boneyards. Some you can visit on a day trip from Vegas. Others might require an overnight stay, if you wanted.

Shown below is a map of Las Vegas and the major airplane boneyards in the vicinity. 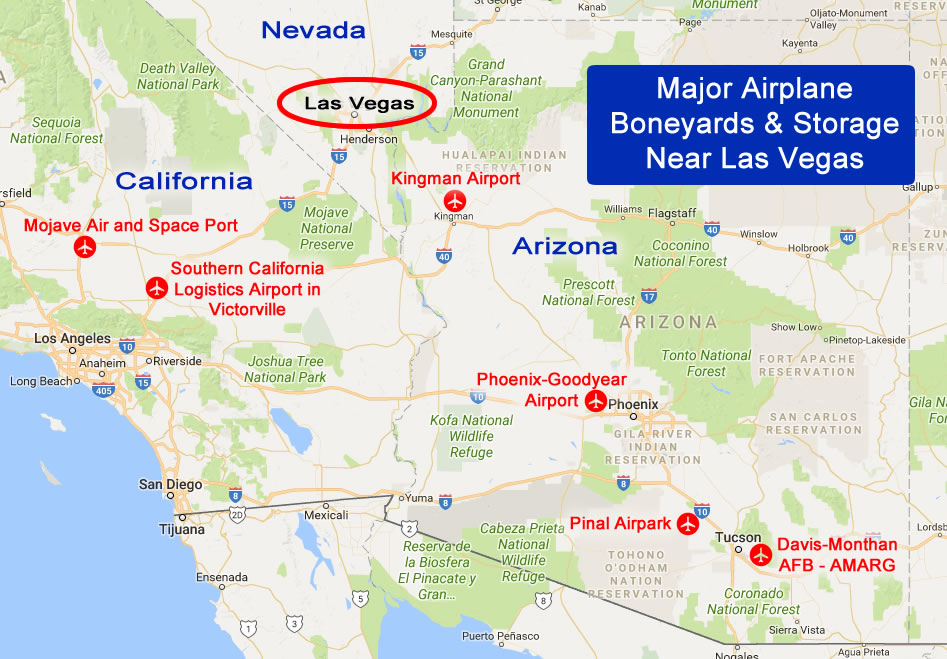 The Kingman Airport & Industrial Park is located five miles north of Interstate 40 in Kingman, Arizona. It is home to more than 70 businesses, including those engaged in the storage of airliners.

Only about a 2 hour, 105 mile drive southeast, Kingman is the closest boneyard to Las Vegas. Follow Interstate I-515 south out of Las Vegas, and connect with U.S. 93 down to Kingman. Don't forget to stop and visit Hoover Dam along the way! Plus, the airport is on Historic U.S. Route 66 - The Mother Road.

When we last visited, dozens of airliners were parked, including those from American Eagle, Continental, DHL, SAS and other airlines.

... and view photos of the Kingman Airport

The Mojave Air and Space Port in the California desert serves a variety of aviation and space industries. It is also a storage facility for commercial airliners, due to its vast area and dry desert conditions.

Large Boeing, McDonnell Douglas, Lockheed, and Airbus aircraft owned by major airlines are stored at Mojave. Some aircraft reach the end of their useful lifetime and are scrapped at the Mojave aircraft boneyard, while others are refurbished and returned to active service.

It is the first facility to be licensed in the United States for horizontal launches of reusable spacecraft, being certified as a spaceport by the Federal Aviation Administration in 2004. The development and launch of the experimental SpaceShipOne was arguably the biggest "first" in the history of the facility.

The Mojave Air & Space Port is located on California Highway 58 between Edwards Air Force Base and Tehachapi.

Directions to the Mojave Airport from Las Vegas, Nevada

The Mojave Airport is about 225 miles west of Las Vegas. Driving time averages 3:30. Drive west on Interstate 15 and take Exit 179 onto California Highway 58 at Barstow.

... about the Mojave Air & Space Port and view interactive map with driving directions

The City of Victorville is located on Interstate Highway 15 between the San Bernardino area and Barstow. SCLA is about 7 miles northwest of the city.

The facility is located on the site of the former George Air Force Base, in active service from 1941 to 1992.

The airport features a precision instrument runway of 15,050 feet  and a secondary runway length of 9,138 feet to accommodate any aircraft flying today.

The boneyard and airliner storage areas can be found just north of Air Base Road (Air Expressway). While you can drive through some of the the streets and roads at SCLA, most business and industry areas are restricted. No organized tours are available.

As always, we recommend obeying all warning signs and avoiding restricted areas.

SCLA is about 195 miles southwest of Las Vegas, Nevada. Driving time is about 3 hours. Drive west on Interstate 15 and take Exit 153A (Mojave Drive) at Victorville.

Proceed north on Village Drive to Air Base Road (Air Expressway). Proceed west, and SCLA entrance will be on the right.

... about the Southern California Logistics Airport and view an interactive map with driving directions

The Pinal Airpark is located in Marana, Arizona, south of Phoenix and just northwest of Tucson on I-10. It acts as a "boneyard" for civilian commercial aircraft as well as a site for airliner storage and reconfiguration. Old aircraft are stored there with the hope that the dry desert climate will prevent any form of corrosion in case the aircraft is pressed into service in the future.

Among the current tenants at the airpark is the Evergreen Aircraft Maintenance Facility. Now known as Marana Aerospace Solutions, the company offers more than 600 acres of secured ramp and storage area for all sizes of aircraft.

It's a good distance from Las Vegas, at 390 miles, but it is an interesting and popular visit for aviation enthusiasts. It has the "former CIA base" angle that fascinate many!

... and view photos of the Pinal Airpark

Its primary role following the end of World War II was that of storage and preservation of obsolete or excess U.S. Navy, U.S. Marine Corps and U.S. Coast Guard aircraft.

In 1965, the Defense Department decided to consolidate military aircraft storage at Davis-Monthan Air Force Base in Tucson.

Phoenix-Goodyear is 285 miles from Las Vegas, probably too far for a day trip. But if you travel plans include both Las Vegas and Phoenix, the airport is a great place to spot stored airliners.

... and view airliner boneyard photos of the Phoenix Goodyear Airport

Davis-Monthan Air Force Base in Tucson: The World's Largest Boneyard

A "must see" on the agendas of many aviation fans is the largest airplane boneyard in the world!

Davis-Monthan AFB is the location of the 309th Aerospace Maintenance and Regeneration Group (AMARG), the sole aircraft boneyard and parts reclamation facility for all excess military and government aircraft. Aircraft from the Air Force, Navy, Marine Corps, Coast Guard, NASA and other government agencies are processed at AMARG, which employs 550 people, almost all civilians.

Another role of AMARG is to support the program that converts old fighter jets, such as the F-4 Phantom II and F-16, into aerial target drones. It also serves as an auxiliary facility of the National Museum of the United States Air Force, and stores tooling for out-of-production military aircraft.

AMARG's typical inventory comprises more than 4,400 aircraft, which makes it the largest aircraft storage and preservation facility in the world.

The base is located just southeast of downtown Tucson. It is bordered by East Valencia Road on the south, Golf Links Road on the north, and Kolb Road on the East. Interstate Highway 10 lies just to the west of the base.

It's a long way from Las Vegas, over 400 miles and a 7-8 hour drive. Is it worth it? It's your decision. But we have visited there on multiple trips, and it's an amazing place. And if you go, be sure to see one of the world's premier aviation museums, the Pima Air & Space Museum, across the street from Davis-Monthan.

AMARG is a controlled-access facility and off-limits to personnel without the proper clearance.


Are You an Airliner Spotter?

Identification of individual aircraft manufacturers and airliners can be difficult with the wide variety of jet airliners in service around the world.

Our new website features Spotting Guides and photographs of common jet airliners in the fleets of airlines today. We focus on jet airliners from Boeing, Airbus, Embraer and Bombardier, even Antonov.

Copyright © 2022 AirplaneBoneyards.com  All Rights Reserved.
An online resource about facilities engaged in the storage, reclamation & disassembly of aircraft ... we do not own or operate a boneyard, or have an affiliation with any boneyard, the Department of Defense, or any aviation museum or tour group