Commercial airliners have limited lifespans. Ultimately, they must be retired from service, stored in "airplane boneyards" or graveyards, and finally disassembled and scrapped. Many of these boneyards are located in the dry deserts of the State of Arizona.

Jetliners eventually reach end-of-life due to airframe wear, obsolescence, or economic conditions. Some jetliners are temporarily taken off flying status, and stored in a environment conducive to preservation. Others are kept for spare parts for flying aircraft.

To protect airliners during their storage from wind and sun damage, engines and windows are tightly covered with white, reflective materials. A sealed airliner can thus be stored safely, for years, until the time comes to return it to active duty, or salvage. Eventually, all airliners are removed permanently from service and must be scrapped.

Airliner "boneyards" in the deserts of the State of Arizona serve several functions: temporary storage, maintenance, parts reclamation, and scrapping. Four major airplane boneyards are located in Arizona, as shown in the map below. 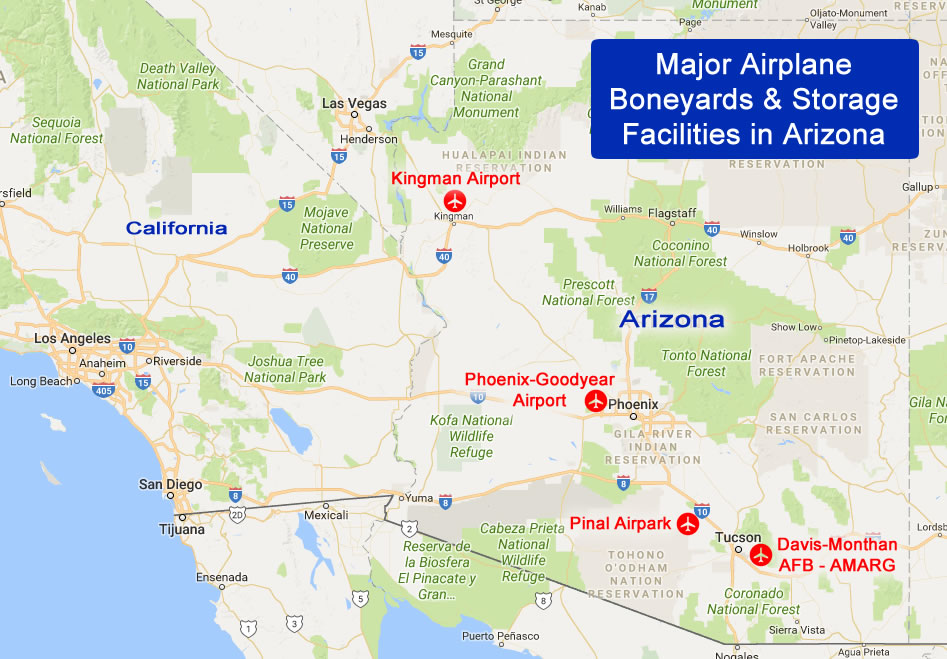 Davis-Monthan Air Force Base in Tucson: The World's Largest Boneyard

Davis-Monthan AFB is the location of the 309th Aerospace Maintenance and Regeneration Group (AMARG), the sole aircraft boneyard and parts reclamation facility for all excess military and U.S. government aircraft. Aircraft from the Air Force, Navy, Marine Corps, Coast Guard, NASA and other government agencies are processed at AMARG, which employs 550 people, almost all civilians. It is the largest aircraft boneyard in the world.

Another role of AMARG is to support the program that converts old fighter jets, such as the F-4 Phantom II and F-16, into aerial target drones. It also serves as an auxiliary facility of the National Museum of the United States Air Force, and stores tooling for out-of-production military aircraft.

AMARG's typical inventory comprises more than 4,400 aircraft, which makes it the largest aircraft storage and preservation facility in the world.

The base is located just southeast of downtown Tucson. It is bordered by East Valencia Road on the south, Golf Links Road on the north, and Kolb Road on the East. Interstate Highway 10 lies just to the west of the base.

AMARG is a controlled-access facility and off-limits to personnel without the proper clearance.

The airport serviced as a major scrapping facility after World War II for surplus military aircraft. Today, it is home to more than 70 businesses, including those engaged in the storage of airliners.

When we last visited, dozens of airliners were parked, including those from American Eagle, Continental, DHL, SAS and other airlines.

... about the Kingman Airport

The Pinal Airpark is located in Marana, Arizona, just northwest of Tucson. It can be reached via I-10 Exit 232 onto the Pinal Air Park Road ... the gate area is about 3 miles west of Interstate 10.

It acts as a "boneyard" for civilian commercial aircraft as well as a site for airliner storage and reconfiguration.

Out-of-service aircraft are stored there as the dry desert climate prevents any form of corrosion.

Among the current tenants at the airpark is the Evergreen Aircraft Maintenance Facility. Now known as Marana Aerospace Solutions, the company offers more than 600 acres of secured ramp and storage area for all sizes of aircraft.

... about the Pinal Airpark

In 1941, the Goodyear Aerospace Corporation offered land to the U.S. Navy to build aircraft flight decks and established a U.S. Naval Air Facility to test fly and deliver aircraft.

Its primary role following the end of WWII was the storage and preservation of obsolete/excess Navy, Marine Corps and Coast Guard aircraft. In 1965, the Defense Department consolidated all military aircraft storage at Davis-Monthan Air Force Base in Tucson.

Following the closure of NAS Litchfield Park in 1967, the city of Phoenix opened the airport as a general aviation facility. Today, the airport is home to several private companies offering aircraft maintenance and commercial pilot training, and an active airliner boneyard.

The airport is located about 10 miles west of downtown Phoenix, a driving time of 30 minutes, depending on traffic. Take Exit 128, Litchfield Road, off of Interstate 10, and drive south about a mile to the airport entrance.

... about the Phoenix Goodyear Airport

Virtually all airplane boneyards and storage facilities are limited access sites and do not allow visitors. We encourage potential visitors to check with individual sites to learn about access policies and tours.

The largest boneyard in the world, at Davis-Monthan Air Force Base in Tucson, has in the past allowed tours of its Aerospace Maintenance and Regeneration Group (AMARG) facility.

However, tours of the AMARG facility have been suspended indefinitely by the U.S. Air Force.

With the wide variety of jet airliners serving the worldwide travel market today and in storage in the Arizona deserts, identification of specific manufacturers and aircraft can be difficult.

On our new airliner spotting website we have included quick and easy guides to the common jet airliners of the day. We include airliners from Airbus, Boeing, Embraer and Bombardier.

Map of locations of active and post-WWII airplane boneyards and plane storage facilities in the U.S. and around the world

Copyright © 2022 AirplaneBoneyards.com  All Rights Reserved.
An online resource about facilities engaged in the storage, reclamation & disassembly of aircraft ... we do not own or operate a boneyard, or have an affiliation with any boneyard, the Department of Defense, or any aviation museum or tour group